What happens when a couple of guys get talking about something like Justice or Beauty or Truth or the Good? Essentially one guy says a bunch of things and the other bloke picks up on a couple of those things and says another bunch of things and things go back and forth till
a) one guy is convicted of, or confesses to, not hitting the mark
b) one guy claims to, or receives acclaim for, hitting the mark
c) both get bored and start getting gay with each other.
Call the audience going 'oooh!' when someone hits the mark, methexis, and call  a guy not hitting the mark, his hamartia, and everything in between Gadamerian hermeneutics- stuff like this 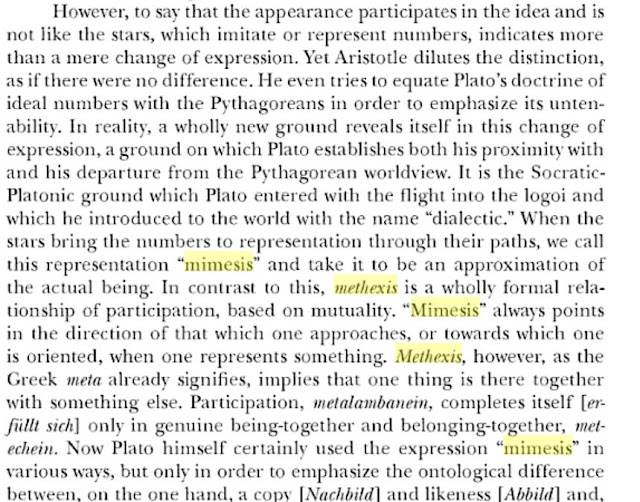 What is Gadamer doing in this passage? Two guys- lets call them Parmenides and Socrates- are engaging in 'what the world calls idle talk'. The possibility that they'll get bored and get gay with each other is precluded by the jealous presence of Zeno. Parmenides convicts Socrates of the hamratia of premature ejaculation - 'you have sought too soon to determine a particular eidos and just so you know, it's not that common, it doesn't happen to every guy and it is a big deal'. Socrates' hamartia gives rise to a sort of communal methexis such that, like Chandler in Friends, we're all going 'I knew it!'.
There are two problems with going any further than this. The first is that dialogue might be an agon and so there is a Girardian mimetic desire angle to it- there can only be One guy who gets the proper relationship between the One and the Many such that no third man argument arises. The second is that methexis could go in the direction of theosis- becoming divine- i.e. rather than dialogue coming up against the problem of chorismos such that the eidos are only known to ideal beings, humans begin to participate in that Divine third who is always present when any two are assembled in His name. 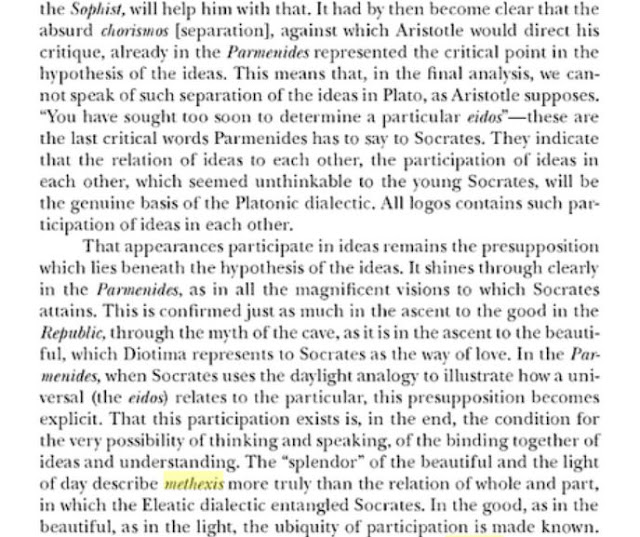 What Gadamer is doing here, it seems to me, is something which isn't interesting though I guess we all do it from time to time and perhaps 'dialogic' is the touchy feely way of excusing ourselves for participating in it. Confused thinking, or shifting the goal posts is one way of describing it. I call it meta-metaphoricity. You use a metaphor to show you understand something or that something you said is intelligible. But it isn't and you don't. So, to save face, you decide the metaphor is reality and that another metaphor you derive from it by means purely verbal is even more real and what you mean by what you say is something that exceeds what can be laid hold of by a hamartia hunting interlocutor and thus methexis is about the way the Beautiful and the Good and the True and so on are all constantly getting gay with each other.

Not that I'm homophobic myself- it's just my husband can't stand them artsy fartsy shirt-lifter types.

Email ThisBlogThis!Share to TwitterShare to FacebookShare to Pinterest
Labels: metametaphoricity