Dawkins vs. the Easter Bunny.


Richard Dawkins as he might look to Americans if he weren't an Atheist. 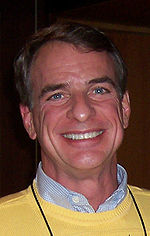 Richard Dawkins as he might look to British people if he weren't an Atheist.


God's You Tube video showing how Dawkins evolved not from a monkey but an angel.
True, Dawkins won't be there- he incarnates the Deus Absconditus better than my plumber- and by dint of his non-presence will win handsomely by default.

It is well known that the power of the Easter Bunny rabbit declines as one approaches Christmas but waxes great after that.

Dawkins, being a nautralist by profession, knows this only to well.
What, however, of the charge that the Easter bunny rabbit condones genocide? Can this be true? No, sorry, Dawkins, what the Easter bunny rabbit condones is God commissioning genocide coz, li'l thumper believes, if he don't condone God fucking innocent people up then God will smite him with a smiting.

Dawkins is just being plain cruel and unkind to Easter bunnies. Next, he'll say there's no Santa.
Posted by windwheel at 17:45 No comments:

Email ThisBlogThis!Share to TwitterShare to FacebookShare to Pinterest
Labels: Dawkins

Zizek become interesting- i.e. more egregious yet- towards the close of the video embedded below.
The big question, of course, is why he keep fondling his nose. Cocaine? Fleiss's reflex nasal nuerosis which renders the tic masturbatory? Or is it not rather the case that Zizek feeds incessantly off his own boogers to fuel his lecture?
My own more far reaching thesis on rent seeking and identity was however fuelled by not boogers but ear wax.
Incidentally, it isn't Regligion which makes good people do bad things but Ethics.


What follows  is from a review by William Converse here-
"Alain Badiou thinks that Aristotle detected delicate philosophical problems in its guise.  However, it was Immanuel Kant who defined the monstrous in his Critique of Judgment (1790): “An object is monstrous when by its size it defeats the end that forms its concept. ” Hegel, in his Lectures on the Philosophy of Religion (1827), called the hybrid “God-man” a “monstrosity”: “In the church Christ has been called the ‘God-man.’ This is a monstrous compound which directly contradicts both representation and understanding.”
Monstrosity (from the Latin monstrum, divine portent of misfortune, monster) denotes an event that is extraordinary, unheard of, outlandish, something that exceeds the normal or conventional. John Caputo calls the Christ Event “a monstrous monstration.”For Milbank and Žižek, but in very different ways, the monstrosity of Christ is the foundation of Christianity.
For Milbank Christ represents a monstration of God’s love for the world, the paradox of the God-man. For Žižek, the monstrous refers to the death of Christ on the cross, culminating in “the cry of dereliction.”  Here Žižek makes a bold tactical move; he introduces G.K. Chesterton. In Orthodoxy (1909), Chesterton wrote that Christianity was the only truly revolutionary religion because it alone posited a God who could experience total abandonment: ”Christianity is the only religion on earth that has felt  that omnipotence has made God incomplete. Christianity alone has felt that God to be wholly God must have been a rebel as well as a king.”
Žižek then quotes the last chapter of Orthodoxy:
“When the world shook and the sun was wiped out of heaven, it was not at the crucifixion, but at the cry from the cross: the cry which confessed that God was forsaken of God. And now let the revolutionists choose a creed from all the creeds and a god from all the gods of the world, carefully weighing all the gods of inevitable recurrence and of unalterable power.  They will not find another god who has himself been in revolt.  Nay, (the matter grows too difficult for human speech), but let the atheists themselves choose a god. They will find only one divinity who ever uttered their isolation; only one religion in which God seemed for an instant to be an atheist.”
Chesterton, who was born up the road from me, was of course merely an incorrigibly ignorant fuckwit of a Grub Street hack. He had either not read the Bible or failed to notice that Christ is quoting the Psalms when he says stuff like 'ye are Gods' and 'Lord, why have you forsaken me'. It's like when you Crucify a Jew in North London nowadays, they're likely to say 'no,no, no' quoting Amy Winehouse rather than 'Papa don't preach' they way they used to back in the Eighties.

Granted, I take you for granted- Else, Dear, God were a Guest too dear
& that to yeast in but yearning's banquet, as Host, my task, Heavenly, True
But Free Counselling at the Baptist Centre? Agapeton, I'm aghast at the very Idea
E'en a righteous pew renter, they'd  rectally enter, ere set lip to my hip flask of You.

Posted by windwheel at 17:32 No comments: