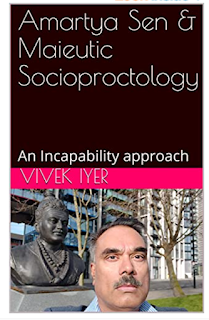 Read it on Kindle.
This book is a critique of Amartya Sen's work in Economics and Philosophy. It argues that Sen's research program failed to take account of1) Knightian Uncertainty and the need for 'regret minimizing' strategies as opposed to 'utility maximization'. This also means an Arrow Debreu model is bound to be misleading because, apart from Uncertainty, it fails to take account of2) Concurrency problems3) problems of Complexity and the higher time class of solution concepts4) problems of Computability5) Brouwer's theory of 'choice sequences' and thus the manner in which mathematical objects may change over time thus invalidating a set theoretic approach
Furthermore, Sen and his followers tend to make the following systematic errors-1) they treat coordination games as cooperative games of a particular type and ignore 'Schelling focality' as a solution concept. They also fail to see why Income and hedging effects arise on associated discoordination games giving rise to arbitrage opportunities.2) they tend to ignore John Muth's notion of Rational Expectations3) Sen confuses marginal utility with marginal propensity to consume and has an odd theory about counterfactuals4) they ignore Aristotle's warning against 'akreibia' - i.e. seeking for more precision than the subject matter will permit.5) they misunderstand the concept of 'oikeiosis' and how this relates to what John Maynard Smith called 'uncorrelated asymmetries.The result of ignoring important developments in Mathematics and Computer Science and Evolutionary Biology made over the last fifty years is that Sen's research program and his voluminous and repetitive publications are wholly vacuous if not mischievous.Sen is a perfect illustration of 'Rothbard's Law'- viz eminent Economists specialize in what they are worst at. Sadly, Sen has been canonized- in the manner of Mother Theresa of Calcutta- but, it is not at all clear that this has resulted in anything miraculous. My book, examines much recent popular writing by Sen or about Sen or on topics- e.g. Arrow's theorem or Rawls's theory of Justice- central to Sen's enterprise. It represents a compilation of blogposts from 'Poetry as Socioproctology'. It is by no means an academic book. It also has much material on controversial topics in Indian history, politics, and religion.