What Promethean elixir does Epimethean inebriety not unseal? What occult malaiseNot heal? What dim and festering secret not with Jovian laughter erase? Chiron's mentor, Bellerophon's mount; upon Laocoon's eels to the more daintily supToasting itself, Drunkenness drains Hope's Tantalus cup. Ah! Torquatus don't you see?Tho' aught I indite but invite to Ind's Poverty- Dionysus conquers only to set free

Posted by windwheel at 16:39 No comments:

Where the mind is without fear and the head is held high
& the Thekedar sells such Whiskey as duty-free we might buy
Where the world is not dissected by narrow domestic walls
From Tripoli's shore to Montezuma's halls
Where words come out from the depth of truth
Like a bollock naked old Sadhu to abash prurient youth
& tireless striving stretches its arms towards perfection
which e'er must elude or succumb to infection
Where the clear stream of reason has not lost its way
& only loiters by the school-yard with itself to yet play
Where Thought is led forward to, in ever widening faction, partake
Rot thy 'Heaven of Freedom', Father : let my country awake!

Note- the first couplet is adapted from  one by Sanjay K. in an earlier comment on this blog.
In this context, the Thekedar is the Govt. appointed contractor for the sale of alcohol in a given area. TAMSAC, the monopolist in Tamil Nadu, was professionally run but appears to be selling sub-standard stuff. The 200 ml bottles bought by the poor appear to maximize negative externalities without boosting revenue much.
Posted by windwheel at 12:48 No comments:


Here too is that Healing whose beginning was the Word
Helping Voice Hearers gain a Voice to be Heard
Whether treading the tight-rope or tumbling in free fall
Within each is the web, all spin to save all.

'To meet in combat' is the original meaning of 'to cope'
A war of attrition allowing its conscripts little scope
For mutual caritas. The baby-birthing 'Proletariat'
Set up only to war with 'Welfare's' Commissariat.

Envoi-
Prince!  The greatest tribute you will ever earn
Is just to live & Love, to its Lord, return

Bibek Debroy, one of our less objectionable Economists, has written some tendentious volumes on the Mahabharata. In 'Sarama and her Children', he makes two ludicrous claims which any ordinary Hindu reader would immediately know to be false.
These claims are-
1) that Vishvamitra stole dog meat because he was hungry but did not actually eat it. This was because it rained and so plants began to grow and, by the Economist's standard assumption regarding a one period economy, this meant they became available to eat immediately.
If Debroy is right, the meaning of the relevant Mahabharata episode is not 'break religious taboos only if life is in danger' but rather 'steal dog meat and offer it in holy sacrifice if there is a drought'.
2) Every Hindu knows that Vishvamitra means  'World Friend' or the World as the theophany of the God Mitra. Why? Vishva means 'World'. Mitra means 'Friend'. Just as 'Ashvamitra' means 'Friend of Horses' so too does Visvamitra mean friend of all the World.
Debroy however thinks Vishvamitra means 'enemy of the World'. Why? Well 'amitra' means not-friend. So, Vishv- amitra would mean 'enemy of Vishv'. However 'Vishv' does not mean World. That is Vishva. What does Vishv mean? Nothing. Well, I suppose, you could have a cod etymology in which it is the root of 'Vishva', which has the acceptation, more especially for Advaita, of  the gross, as opposed to subtle, aspect of perceptual reality. However, since this gross aspect is sublated by subtle 'taijasya' type soteriological knowledge, it forms no part of Vishva once the latter is properly perceived as 'prajnya' (blissful, all pervasive and unsublatable). To say Vishvamitra is the 'Friend of the World' means the same thing as saying he is the 'Enemy of a gross perception of the World as material, temporal and self-contradictory'.
(This is to simplify things a little. There are paramparas, lineages, where Vishva is used for Vishv- e.g. in this passage (from Wikipedia)
(The significance of the word, Vishva, in Hindu philosophy, is revealed in the Upanishads. In the Āgama Prakarana of his Karika on the Mandukya Upanishad Gaudapada explains that in the three states of consciousness, the one and the same object of experience and the experiencer appears in three-fold forms (त्रिधा भोगं) as – विश्व (Vishva) ('gross'), तैजस (Taijasa) ('subtle') and प्राज्ञ (Prajna) ('the blissful').)

Why does Debroy say Vishvamitra means the 'enemy of the World' when all Hindus know the opposite is the case? The answer is that he wants to prove that the name actually means 'Special lover of dogs'- Vi-shva (dog)-mitra. The problem here is that according to Debroy's eccentric sandhi, the meaning would actually be 'special enemy of dogs'. 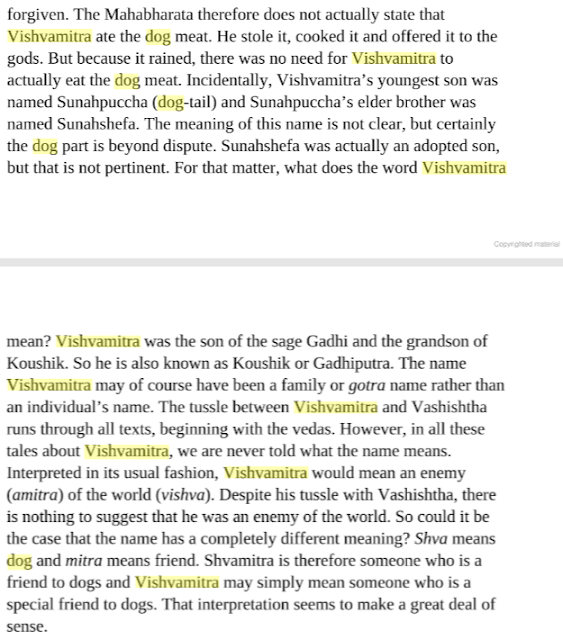 Debroy is too shy to tell us that Sunahshepha means 'dog's penis'.
This is illuminating for adepts, because the subtext to the whole episode of Vishvamitra and the Chandala is a comparison of the Asvamedha ritual (in which a dog is sacrificed for a specific reason) which Visvamitra alone among the Vedic Rishis had completed, and its esoteric counterpart in Upanishadic praxis.
Debroy, of course, being an Economist, is deaf to any such 'dhvani'.
He thinks that the Mahabharata was a text lying around in philology phase space which suffered random interpolations. No redaction of the Mahabharata is internally consistent. It's a book with no organizing principle. Even when it uses a name whose meaning is immediately understood by all knowers of Sanskrit and most Hindus- e.g. Vishvamitra- the 'usual fashion' of interpreting it- at least if the writer is an Economist- turns out to be the opposite of what is universally known and acknowledged. But the fun doesn't stop there. Not only do words mean the opposite of what they were intended to mean and are accepted to mean, they don't mean that either but something else entirely, logic be damned, grammar be damned, because, hey!, hermeneutics is an 'anything goes' General Equilibrium.

Posted by windwheel at 11:15 No comments: