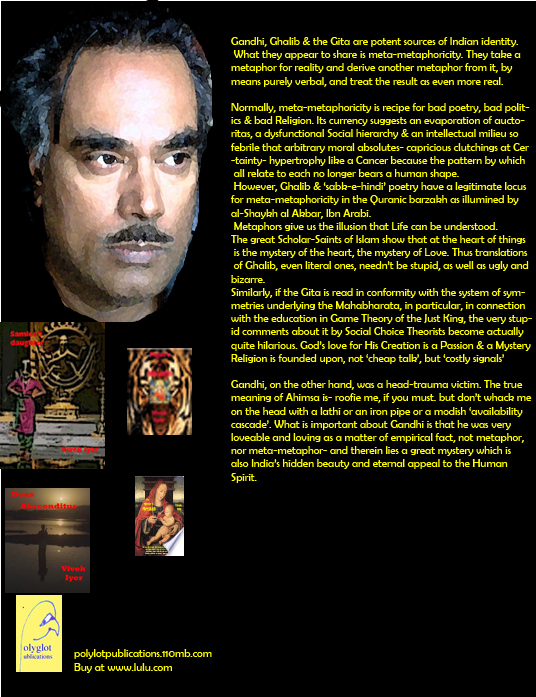 Ghalib, Gandhi & the Gita, for smart-smart people, are like that King who gained the boon that whoever faced him in battle lost half his strength to him. In other words, this warrior was always guaranteed to be more powerful than the one who faced him. I suppose the same is true of the jiu jitsu master who becomes more lethal in proportion to how much heavier, more powerful and aggressive his adversary is.
Valmiki tells us of the vanquishing of this King- Vali of the Vanars. Rama does not confront him head on, but slays him from behind a tree. This is a grave violation of the warrior's code. When the dying Vanar berates Rama, the latter appears to have lost half his moral strength to his adversary because "he winds up his reasons for killing Vali by coolly saying: 'Besides you are only a monkey, you know, after all, and as such I have every right to kill you how, when, and where I like.' '"
It seems intelligent people- Professors and Chief Justices and the like- consider Poetry fair game and, at least, with respect to India's more humbly born bards- that is the merely Hindu- more than perennial Open Season, there is an actual State subsidized bounty on their pelts.
Rama has a perfectly good defense, but doesn't make it- 'You are an elder brother who has mistreated his younger brother thus setting a precedent. I too am an elder brother and what rankles most in my mind is that my own co-Mother was swayed by the canard that elder brothers believe themselves entitled to bully and oppress their younger siblings. Furthermore, you have taken another man's wife and thus acted like the ogre who took my wife. I have slain you the only way you could be slain. To be frank, a duel is no duel if only one party wears armor. It is an elementary principle of our Warrior training, that in a combat with heterogeneous weapons, each party is obliged to apply forethought and exercise vigilance against the adversaries 'counter measures'.
'My dear Vali, you have claimed exemption from the incest-prohibition rule by saying you are merely an animal. Moreover, you say you have neither a valuable pelt nor is your flesh savory. It is quite true that hunters see no profit in killing animals of this description, just as Judges entertain no law suits against beasts for things like alimony, child support, or behaving like Tiger Woods.
'There is a reason we warriors scorn to attack an enemy other than head on. This is because the base and envious consider the fact that a man received an arrow in his back to be proof that he had turned tail and fled the battle-field. Amongst the Tamil people, there is a story of an aged woman who received news that her son had been slain in this manner. She went to the battlefield and searched amongst the piled corpses for her son. When she saw that his injury had been received in the chest, not the back, she set up such a cry, not of lamentation but rejoicing, that milk spurted from her wrinkled dugs and the Gods in Heaven showered down rose petals.
'Examine yourself, Vali. Though I shot from the side, the arrow has entered your chest as if shot by one whom you confronted head on. '
In this context, I found this anonymous comment on the Internet- 'One may say that arrow of the Lord, that is Illumination, is like the ray of that other, the black, Sun whose dark light shines on the back of all things and, the meaning is, it gets its power even from the strength of tamsic, dark, inertial, properties of our heart. Considered in this way, we see also Valmiki is not attacking from in front but using our own tamas and nescience to get power for our personal Illumination.'
As a Saivite, by birth, I naturally associate the Rama-Valin episode with Pasupati- the Lord of the Bound- but hesitate to develop this theme for fear of giving offence to Vaishnavites. Indeed, if at any time I appear to be engaging in sectarian polemics, do please let me know or, in any case, immediately attribute this oversight of mine merely to my own diligent cultivation of stupidity and irremediable offensiveness rather than some defect inherent in a Teaching of which I am utterly, albeit fondly, ignorant and unaware.
The Ramayana, a Vaishnavite text, is of course, everybody's favorite whipping boy because Bhagwan Valmiki is considered 'lowly' according to some modern caste system which, myself a stupid, Saivite, Hindu, I don't personally understand.
With Ghalib- generally considered a proper Aristo- though there are good books about him, every volume of translation into English of his ghazals creates the impression that he was a witless, worthless, cry-baby who never espoused an original theme and who remained entirely ignorant of that branch of Islamic philosophy which gives meta-metaphoricity a locus- viz Barzakh- and soteriological purpose- viz Tajaali or theophany.
To add insult to injury, simple minded people, like former Chief Justice Katju, say things like
'Eemaan mujhe roke hai, kheeche hai mujhe kufra
Kaaba mere peeche hai, kalisa mere aage'
'i.e.- 'Faith is stopping me, while atheism is pulling me forward. Kaaba is behind me, the Church is in front.' Here the word 'Kaleesa' only ostensibly means 'Church', but its real meaning is modern civilization. Thus Ghalib, like many Urdu writers, is opposed to feudal civilization and commends modernism.'
Fatwa time, anybody?

This is the Kavka's toxin at Dijkstra's table. No philosopher- or Research Program or Policy Agent- would sit down at it unless there is a huge exogenous pay-off for being diachronously inconsistent- i.e. unless there is a predictable phase shift- like the jump to hyper-space in Star Wars- in its own trajectory arising only in that dynamic environment.

Since Gandhism is radically meta-intentional, it initially appears to have some appeal in a Kavka toxin context. But, if Kavka's prize is contested, then we have Dijkstra's Round Table which means, as Indian history shows, lots of people starving or senselessly slaying each other and very little, very very little, thinking of any sort actually occurring.
Still, as part of a mixed strategy- i.e. to retain a stochastic element- it made tactical sense to keep Gandhi as an 'obligatory passage point' in the Leadership problematization because
1) if he can't deadlock a Round Table, he can at least 'livelock' its deliberations
2) if the other side can systematically fool him, his own side- equally surely- can manipulate him by 'preference falsification'- i.e. pretending to want the opposite of what they really want.
Policy Actor Hazard cuts both ways.
Thus, the stochastically consequentialist element in Gandhi's leadership, rather than its deontic predictability of pi-jaw, made his political longevity an evolutionarily stable solution.

Unfortunately, a vitalist Lamarckism bedevilled the thinking of the first part of the twentieth Century and thus it is only recently that the Game theoretic nature of the Gita's meta-ethics has become the natural way of reading it. Thus the sublime irony-as-theodicy that Gandhi's translation of the Gita truly was, not his living it, but its living him has escaped the attention of Academia.

One final point- when I was growing up in the 70’s, many Indians- at least of my sort of background- hadn’t cottoned to the utter bankruptcy of the Liberal Arts. Since then, people who read books about Ghalib, Gandhi and the Geeta are no longer pi-jaw merchants by trade, but gainfully employed in some sort of technical, or applied math driven, profession. There was a young man a couple of years back who thought he had solved the P=NP problem. He hadn’t, but what’s interesting is that he was from an Engineering background- not a pure academic. My belief is that people of this sort can rescue Ghalib and the Geeta from stupid pi-jaw merchants, but only if they understand that Gandhi was shite because all pi-jaw is shite.
I’m not saying this book of mine isn’t shit. It is. But only coz I’m stupid. Take this Concurrency business. There’s an essay on the internet, by the quite lovely sounding Brazilian super-brain, Christine Cordula Dantas- recall the gorgeous Giselli Monteiro who plays the shy Punjabi soni kudi in Love Aaj kal is actually Brazilian- which seeks to make Concurrency a fundamental property of physical systems and thus revive a Bergsonian notion of Time.
'If concurrency is some deeply inherent property of the world, then it would not be a consequence of dynamics, but the fundamental cause of it. If this hypothesis stands correct, then an insight should be gained on the nature of time, by making our theories explicilty concurrent.
'Concurrency should be elevated as a new internal symmetry of the world, in which the probabilistic framework of quantum mechanics would be just an emergent and incomplete facet of a more heterogeneous underlying substrate. And the reversible or irreversible behavior of a given system must somehow be attributable to the underlying heterogeneous concurrent correlations.'
The said gorgeous pouting Brazilian, probably while dancing the salsa, makes an equation between Time and inertia- 'Inertial mobility, hence Time, emerges because the Universe avoids deadlock conditions.'
I take it, this is an Anthropic type argument and further suppose 'concurrency as internal symmetry' means her proposed model doesn't throw away information and conserves something more fundamental which might knit extant theories together. However, by appealing to a ditopology (so there is local partial order), the essential question of non-metric, or ontologically dysphoric, Bergsonian Time is not addressed. Perhaps, the only way that could be done is by operationalizing Ibn Arabi's concept of barzakh or opening the gate to reverse mereology or her recreating the 'Satrangi Re' dance sequence from Mani Ratnam's 'Dil Se' - while I lip sync Ishq pe zor nahin, hai ye woh aatish Ghalib...
Christine, of whom I dream, ends her essay thus- 'In any case, this essay was written presuming that Time exists in some fundamental sense, fully acknowledging, however, the possibility that it may not. If this turns out to be the case, what are we severely missing? Would we be just a surface of imposed irrelevancies- the irrelevancies of Time below which the realm of “nature against nature", the summit of relativism, would forever lie, devoid of its own existence?’

I appeal to my younger readers- kindly solve this problem and Email me the solution.
If Time does not exist, or the Universe gets deadlocked, how I can ask her for a date?
Not that I am a Romeo or Don Juan or Dr. Manmohan Singh or anything
It’s just that, as Ghalib said, ‘Love is that fire, which cold-shoulders Iyer’ and as Gandhiji added ‘no fat chicks!’ and Gita explained ‘Bhargava not Bhagvad is my surname. Gita Bhargava, not Bhagvad Gita. Could you please quit phoning me?’
Thus my case is critical.
I need your help- not lit crit help- but help for the other thing- mathematizing the solution you will find in this book to the Concurrency problem. You see, the only possible reason for women looking askance at my importuning for a date is because, in their heart of hearts, they believe Time does not exist. Christine won’t have that excuse, thanks to the proof you will send me.
Normally, I wouldn’t impose like this, but something terrible has happened.
You see the one parlous hope I have pitiably lived upon since the dawning of this dire Millenium was that South Park would finally get round to doing a 'Gandhi, Ghalib & the Gita' episode in which Mr.Hankey, the Christmas poo, would explain everything in time for the credits to roll.

But, apparently, the program is going irrevocably off the air.
My horrible book, if nothing else, is a protest against this final dimming of the lights of civilization.
In our yet dawning darkness, stay strong sisters & brothers! & murli Manohar Joshi.