In 1988, Romila Thapar gave a lecture in which she said-

The word 'Communalism' was first used in an Indian context around the time of the Morley-Minto Act. It was preceded by the creation of the Muslim League. Perhaps the similarity with the Arabic word 'qaum' (Nation) suggested this usage. It is noteworthy that the Hindu Mahasabha was created almost a decade after the Muslim League. Mahatma Gandhi- who identified as a devout 'sanaatani' Hindu- was in attendance. He wanted a united India obedient to the ancient Indic principle of 'Ahimsa'. The Muslim League rejected Gandhi's conception of Indian Nationalism. They argued that Muslims are a separate 'qaum'- i.e. Nation. The Muslim League won the Muslim vote by an overwhelming majority in 1946 which is why Pakistan separated from 'Hindustan'. Non-Muslims were killed or ethnically cleansed from Pakistan. It seems 'Communalism' triumphed in Pakistan. Arguably, it also triumphed in India. Though Muslims were not ethnically cleansed as a matter of State policy, nevertheless it is a fact that Muslim refugees who had crossed the border at the time of Partition were not allowed to return and claim Indian citizenship.
Why did 'Communalism' begin to increase in the Seventies and Eighties? One reason was the failure of Communism. The Soviet Invasion of Afghanistan was the beginning of the end for that ideology. The Khalqi faction was killing clerics and landlords in the prescribed Bolshevik manner. This led to a successful Islamic revolt, assisted by Pakistan and the USA. In India, with Pakistani support, Sikh 'communalism' took the shape of an insurgency demanding the formation of a 'Khalistan'. Indira Gandhi was killed by Sikhs. Rajiv Gandhi won a landslide as the defender of the Hindus. Then, having lost an election because of his incompetence and corruption, he was on his path back to power when he was assassinated. Since his wife was Italian, she could not replace him immediately. At best, her position was that of a Regent for her son. This meant Congress could not put forward a strong and able Prime Ministerial candidate. Since the Communists were useless, the BJP stepped into the breach. However, it was only after Rahul turned out to be a dud that Congress dropped all pretence of being a Nationalist party. It's 'vichardhara' (ideology) is Thaparesque.
Just recently Thapar said in an online lecture that India is teetering on the brink of becoming a Hindu Nation.
This is odd. India is a Hindu Nation. Religion is the cement which holds the country together. Non-Hindus are separatist where they are in the majority- unless this involves enslavement by China.
Thapar said- “Nationalism is the reflection of how people in a society think about their collective self."
This is not true. People in a society may not think they have a collective self while being Nationalist. Alternatively, they may have a poor, highly parochial, collective self-image yet hold to Nationalist ideals of self-sacrifice. The fact is lack of Nationalist spirit may lead to enslavement. It is a useful quality to have.
On the other hand, members of a Religion may, for theological reasons, think they have a collective self. Irrespective of which Nation they belong to, they may aspire to live the same kind of life. But, if war comes, they may slaughter each other with as much vim and vigor as their atheistic comrades.
Thapar is very old. Thus she babbles nonsense-

The collective means that everyone that constitutes the nation should be included as equal citizens.

This is nonsense. The Queen is not 'an equal citizen'. However, her Nationalism may be as great, or greater, than any of her subjects. It is false to say that Nationalism only exists where there is no hierarchy. A slave may be a Nationalist. A King may be a traitor.

But when nationalism is defined by a single identity,

All Nationalism is defined univocally as giving rise to a legal identity such that membership can be made subject to a juristic process. I may cheer for the Armenians in their war with the Azeris. But this does not mean I am an Armenian national.

which can either be language or religion or even ethnicity,

Nonsense! There is not a single country in the world where 'language', 'religion' or ethnicity' is the sole determinant of Nationality.

then nationalism gets derailed into majoritarianism.

So, according to Thapar's logic, no presently existing nationalism can be 'majoritarian'. Even under Hitler, it was not enough to be ethnically German to qualify as a German National.

And majoritarianism is not nationalism.”

It may be, if the Nation is democratic.

Thapar said the struggle for Independence had an “all-inclusive nationalism of Indians opposed to British rule”.

Indians who 'opposed British rule' were a tiny minority. The majority, like Thapar's Dad, supported British rule either by working for them or paying taxes to them or simply ignoring Gandhi & Co.

However, the insistence on two nations by the British

The Brits did not insist on two nations. The Muslim League did.

led to a nationalism defined by religion that found acceptance among some Indians.

Which Indians? Mahatma Gandhi, Maulana Azad and Pundit Nehru. It was they who agreed to Partition. It seems 'opposing the British' came at a price.

What about the creation of Bharat, that is India, which has a Directive Principle in its Constitution re. cow protection?

And in current India, it can be argued that it is teetering on the edge of creating its Hindu equivalent.”

Nationality and Religion are important enough to have legal definitions or to be otherwise justiciable. Anyone can talk bollocks about imaginary edges on which some shite or the other teeters or topples. But, if someone says 'x does not belong to Nation Y or Religion Z' then it may be worthwhile to go to law. Indira Gandhi did so to prove her son was a Hindu not a Zoroastrian. Sonia Gandhi might have had to do so to prove she was Indian not Italian. Since Nations and Religions are real things, they have sharp, 'bright line', not amorphous, definitions. Thapar remains as ignorant of this fact now as 32 years ago, when she wrote- 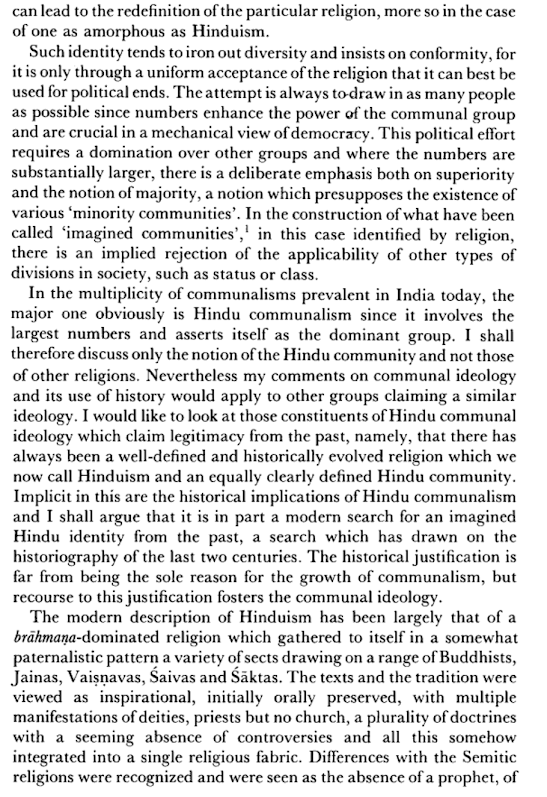 Thapar does not say that Islam or Sikhism represents a mere 'imagined community'. That might have got her killed. Instead she says Hinduism never existed. But, even if this were the case, we need only to look at what is happening in Pakistan or what would have happened in Khalistan, to want something like Hinduism to exist simply as a matter of self-defence.
Of course, nobody wants Gandhian Hinduism- everybody spinning cotton and talking bollocks incessantly- but, rather, when push comes to shove, troops who will go over the top shouting 'Har Har Mahadeva'. The alternative is running away from jihadis till there is nowhere to run to at which point, like Raja Ram Mohan Roy, one has to beg Whitey to come and settle the land.
Thapar is Khattri and so praises Shramanic Religions- whose founders were Kshatriyas- while heaping scorn on Brahmans. However, if Hinduism was 'amorphous', then, clearly, nobody would have been able to tell who was or wasn't a Brahman.
Islam did not prevail entirely by conquest. There were missionaries as well as traders and artisans who were welcomed for economic reasons. Quite naturally, foreign invaders were referred to not as Muslims but as foreigners because some Muslims were already indigenous. Thapar does not get this. She says- 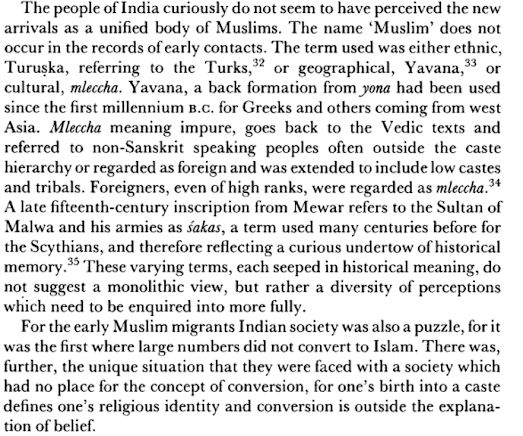 Thapar is too stupid to understand the present. She is hopelessly at sea in the past. The reason invaders were not called 'Muslims' was because there were indigenous Muslims as well as other Muslim powers or communities who were potential or actual allies.
As for the Muslims themselves, they were not united at all. They had their own tribal and sectarian rivalries. Moreover, they knew that Islamization was a slow process. For purely fiscal reasons, it was preferable that 'large numbers did not convert' immediately. As for Hinduism, 'birth into a caste' does determine personal law but not religious identity. Conversion happened all the time.
Back in 1988, it was not obvious that Thapar was a cretin. She and her ilk had a chance to intervene in the Ram Janmabhoomi case. But their stupid lies could not stand up in Court.
Thapar ended her long ago lecture thus-

32 years later we can with greater truth say that the polemics of the Thapar age were utterly shite. Institutions and ideologies of modern times must be modern and based on better Structural Causal Models and the improved Mechanism Design this permits. To look to the past for 'legitimacy' is foolish. Just coz Rahul's great-great-grandfather was once President of Congress doesn't mean he isn't utterly shit.
Dialogues between historians, it turns out, are useless. Stupid cretins merely egg on other cretins to greater stupidity. They may think this contributes to 'fighting Fascism' or 'preventing India from becoming Hindu' or some such rot but the truth is it just goes to show that non-STEM subjects ought not to be studied beyond a basic 'Teacher training' level. The thing rots the brain.
Posted by windwheel at 04:31